This study represents a collaborative effort between Michigan Tech Research Institute (MTRI), the University of Michigan's Transportation Research Institute (UMTRI) and Toyota's Collaborative Safety Research Center (CSRC) to better understand the variability of radar scattering from vehicles and how to develop surrogate vehicles for automotive safety tests. The surrogate vehicle in automotive safety tests must present responses to the collision avoidance radar similar to those of a vehicle. However, the surrogate vehicle must be inexpensive and present no harm to the test-driver or vehicle under test.-

The principal objective of this study was to advance the understanding of the variability of W-band reflectivity of vehicles to aid the design and development of an automotive surrogate target for safety test. The surrogate target is intended for evaluating the performance of vehicles equipped with radar pre-collision system (PCS). The results of this research have been disseminated in multiple conferences and proceedings [1-3].

The team developed a test pool of 25 vehicles for radar measurements based on their occurrence in the national crash report database and an extended set to increase the classes of vehicles. The vehicles were measured with a radar at W-band with an antenna set at a height of 45 cm, typical for automotive radar, and scanned in azimuth across the rear end of the vehicles from a range of 40 meters.

Measurements from the vehicles were scaled to provide relative target reflectivity against a calibration target. The radar response from the multiple angles was used to form real beam imagery and identify scattering sources on the vehicles. This informed the design of our surrogate vehicle.

Additional measurements evaluated the light-weight materials that would comprise the surrogate vehicle’s structure. The foam vehicle would then have appropriately shaped and scaled radar reflectors located in places typical of automobile scattering sources.

The pool of vehicles and angles provided a statistical sample of reflectivity to evaluate the completed surrogate vehicle, using the same measurement process. This evaluation was also performed to evaluate a surrogate designed and developed by US Department of Transportation’s National Highway Traffic Safety Administration and the results are reported in [4].

The radar measurements, such as the plot in Figure 1, identified the most significant scattering sources as follows: bumper, license plate shelter, muffler, rear-axle, differential and suspension, chassis supports, rear-spoiler and the join between rear-window and vehicle roof. This allowed us to choose representative scattering sources to embed in the soft surrogate vehicle, shown alongside a Honda Accord in Figure 2. A representative radar measurement of the surrogate vehicle is shown in Figure 3.

Statistical models of the vehicle scattering were used to generate error trade curves for a hypothetical detector. The trades compared radar measurements that were made with a vehicle present with measurements made with no vehicle present. We compared the error trade curve for the surrogate vehicle to those curves generated by the best and worst case scenario from the pool of vehicles, as in Figure 4, to show that the surrogate vehicle would generate reasonable reflections for evaluating vehicles equipped with W-band collision avoidance radars. 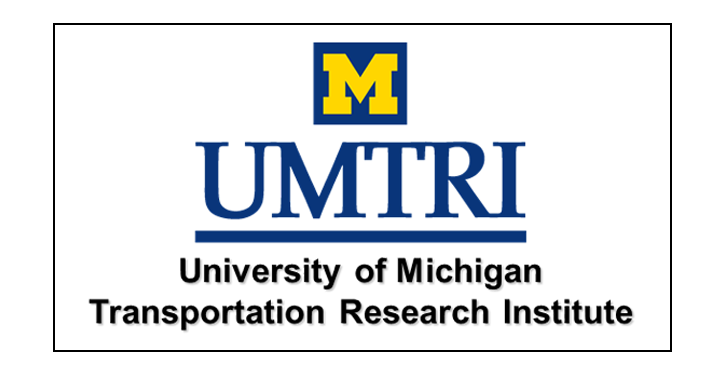 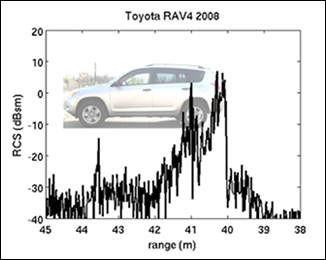 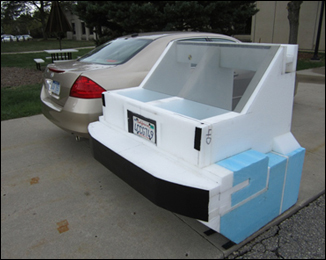 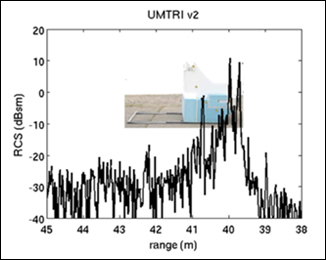 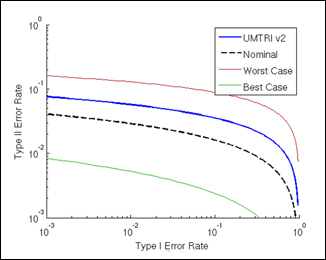 Figure 4 - The error trade curves compare the error rates of the surrogate vehicle built by UMTIR (version 2) to rates derived from the pool of vehicles: Worst Case, Best Case and Nominal.