Southern California faces a unique set of challenges heading into the 21st century. Its high urban population density is concentrated along the coast, but is highly proximate to rural areas dominated by fire-driven ecosystems, an area known as the Wildland-Urban Interface (WUI; Radeloff et al. 2005). This large WUI area coupled with a climate phenomena known as the Santa Ana winds make Southern California susceptible to large wildfire disasters (Schroeder et al. 1964, Westerling et al. 2004, Keeley et al. 2004). The Santa Ana Winds create an ideal fire weather environment by exacerbating already-dry conditions and moving hot air at very high speeds through dry shrublands, causing fires ignited in rural areas to be pushed into urban regions of the state. This was exemplified in 2003 and 2007, when large wildfires swept over San Diego County, burning approximately 650,000 acres of grassland and chaparral, killing and injuring several people, and incurring over $3.8 billion in property damages (Karter 2004, Karter 2008). Models of future climate predict weather conditions that will increase the occurrence and severity of wildland fires (Westerling et al. 2006), so it is important to understand how future climate will alter fire regimes and impact public health.

Dr. Nancy French of MTRI headed a study funded by the National Institute of Environmental Health Sciences (https://www.niehs.nih.gov/), a part of the National Institutes of Health (NIH), to (a) measure and statistically model a relationship between particulate emissions from wildland fires and respiratory illness and then (b) assess the impact of future climatic conditions as manifest in respiratory health outcomes. The study is affiliated with the NIH Climate Change and Health Initiative and funded through the American Recovery and Reinvestment Act (ARRA).

There are three specific components to the integrated modeling activity: 1) modeling spatially-defined fire emissions, taking into account vegetation fuels and weather, 2) accurately estimating particulate concentrations for downwind regions using transport/dispersion modeling, and 3) combining the smoke emissions with electronic health monitoring to relate the modeled spatial/temporal distribution of pollution to the rates and spatial location of respiratory symptoms. We carried out the development of the predictive model via a Generalized Additive Modeling (GAM) approach, able to incorporate emissions-transport, demographics, weather, and scheduling (day of week) information to derive an accurate predictive relationship for describing the impacts of fire on respiratory health in San Diego County. 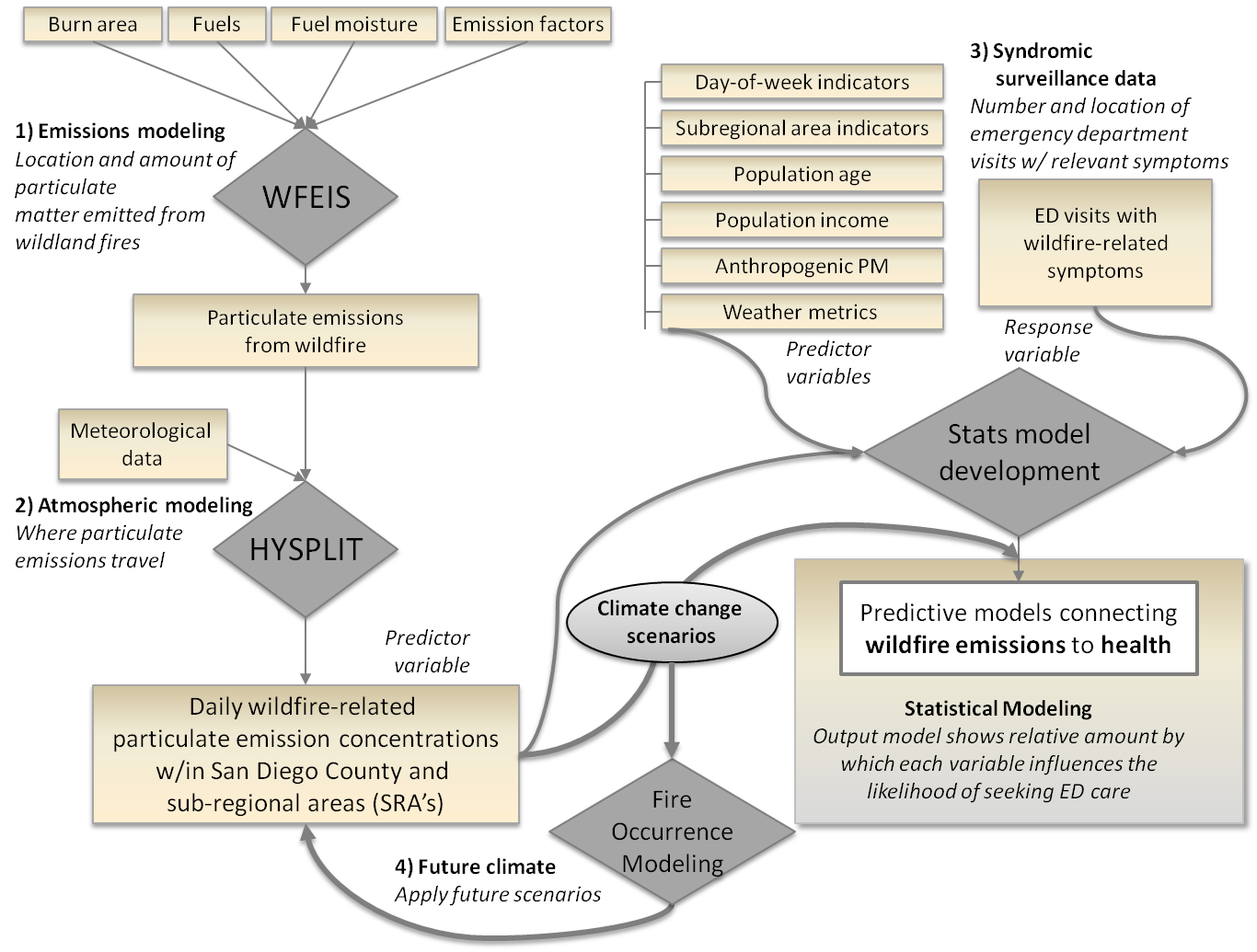 Analysis of future fire occurrence shows San Diego County will experience approximately two extreme fire seasons each decade through 2040. We are in the process of finalizing a manuscript to demonstrate the application of the model connecting wildland fire smoke concentration to health outcomes in years of these extreme fire conditions. Our initial results show that the model formulation can be used to assess the location and impact of elevated PM concentrations from particulate emissions originating from wildfire in and around San Diego county that could be valuable for use by public health officials. In a proposed additional grant activity, we hope to work more closely with public health agencies and first responders to better define the value of applying our model and how products we could generate from this study can be improved for their use.

Highlights of Project Outcomes and Results

Our interdisciplinary research team developed a coupled statistical and process-based model system that: 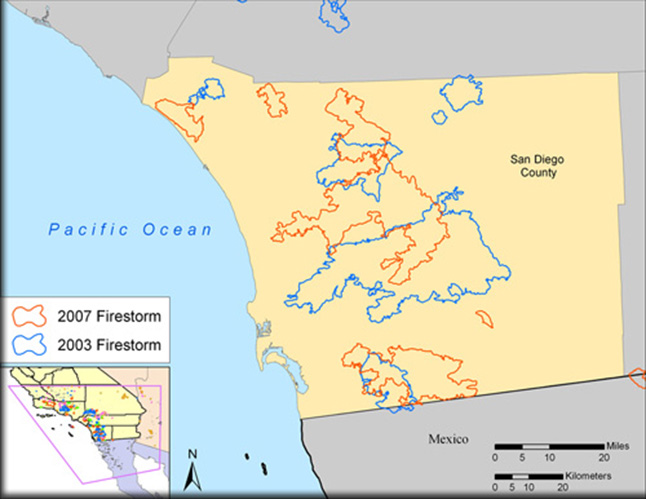 Perimeters of the massive fires that swept across San Diego County in 2003 (blue) and 2007 (red). Inset map shows the larger Southern California study area outlined in pink, with MTBS and MODIS-derived fire perimeters for 2003-2007 shown in multiple colors.

In preparation for submission to Environmental Health Perspectives.