MTRI is currently collaborating with the USGS Great Lakes Science Center to develop tools that will narrow the existing knowledge gaps in the status and key drivers of inland fisheries. By providing models that provide potentially less biased estimates of fish production as well as some key variables that could predict fish production, managers would have better information to both currently manage these key fisheries and perhaps prepare for future climate-induced changes on their fisheries. MTRI is supporting and participating in this modeling effort by developing explanatory variables related to characteristics of inland lakes themselves (chlorophyll concentration, water clarity, temperature) and their watersheds (land use/cover, climate variables, elevation). Primarily using medium-resolution multispectral satellite imagery, MTRI is generating a database of such variables for a large sample set of inland freshwater lakes across the globe for which in situ data on fishery production and/or chlorophyll concentration are available. Interrogating this database will help clarify the drivers of inland fishery production, laying the groundwork of a greatly improved estimate of total global inland fisheries production. 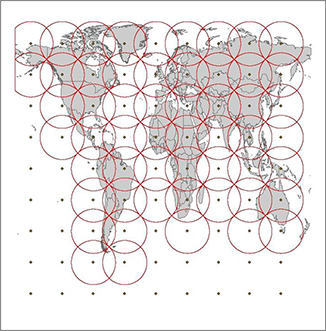 Compositing methods will also be applied to selected regions/years where USGS has found field CHL values. 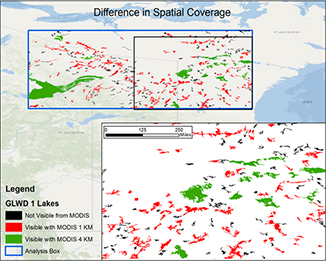 Global monthly 1-km MODIS composites for 2012 are ‘in production’. An MTRI intern is downloading files based on the spatial grid to the left. Below, an example from northern Canada shows how many more lakes will be visible with the MTRI Composite Method (Red) than with the NASA OceanColor Standard Composite (Green).