The M/V Ranger III carries park visitors to and from Isle Royale National Park twice weekly between May and September, providing an ideal platform for regular time-series data collection. The information collected could greatly benefit climate, ecological, and biogeochemical research on Lake Superior. A major problem in studying large ecosystems such as Lake Superior is the need for spatial coverage to complement time-series data from weather buoys. Presently, time series data for only a few parameters are collected in offshore waters. Synoptic spatial surveys of the lake are limited to a few variables measured by satellite or infrequent ship based surveys. The Ranger III crosses a central basin, providing both time series measurements as well as spatial coastal and deep-water coverage.

The most desirable design would meet these requirements:

The system meets all of its intended goals: 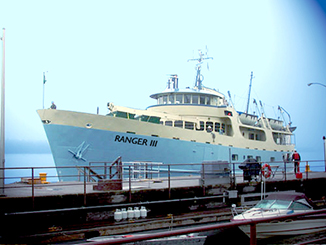 The system is operating on the Ranger III at this time with an updated design. At the end of the each trip, the collected data are transmitted to MTRI via Internet for further analysis and posting to a collaborative website.