The purpose of the study was to develop scientific methods for monitoring the effectiveness of herbicide spraying as a management technique for controlling the invasive species, Phragmites australis. Focus was on the evaluation of effectiveness of past herbicide treatments on Phragmites, and post-treatment restoration response of vegetation and faunal biodiversity. Treatment effectiveness was assessed in a nested scaling design, from field surveys to high resolution aerial imagery to moderate resolution satellite imagery.

This study provides: (1) improved understanding of the field and remote sensing approaches for assessing the effectiveness of herbicide efforts on the management and control of invasive Phragmites and the restoration of coastal wetlands (biodiversity); and (2) a thorough investigation of the literature and compilation of results for adaptive management recommendations.

Green Bay had blanket herbicide treatment in 2011-12 by Wisconsin DNR and Saginaw Bay has had limited treatment by individual organizations from 2006 to 2013. 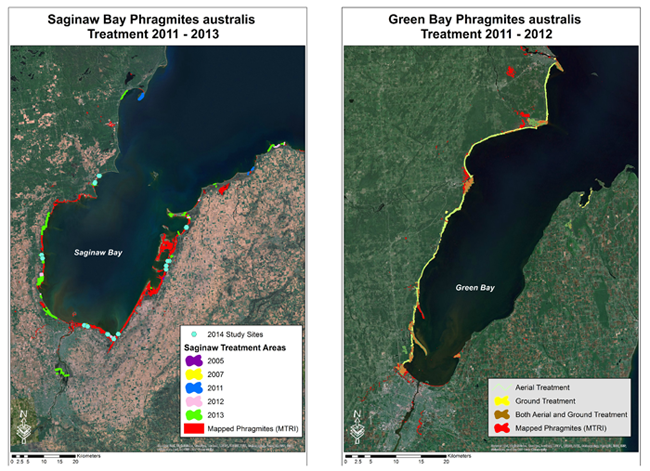 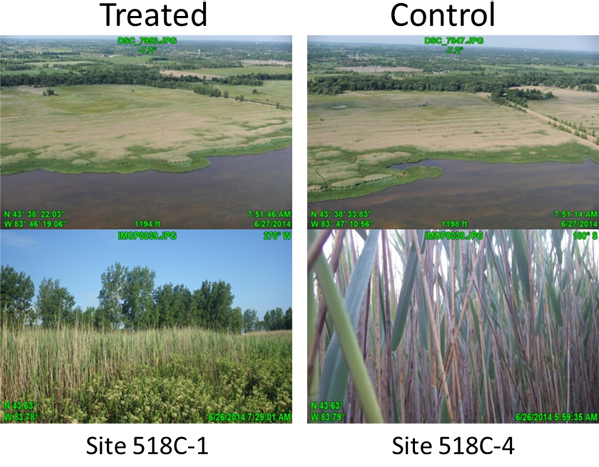 Indicators of Biological Integrity (IBI's) developed by the Great Lakes Coastal Wetlands Consortium are being used to assess biodiversity of Birds, Amphibians and Vegetation.

Of the three variables analyzed for this study (vegetation, anurans, birds), the results of the vegetation surveys provided the strongest indication of a positive effect of Phragmites treatment on biodiversity (i.e. the mean species diversity of native plants increased significantly following Phragmites treatment). In comparing post-treatment effects in Green Bay and Saginaw Bay the statistical analysis indicated that live Phragmites cover was reduced significantly by the 2011/2012 treatment activities along western Green Bay whereas, in Saginaw Bay, analyses indicated that the patchwork of treatments applied there during the same period did not have a strong effect on the percent cover of live Phragmites. This suggests that the regional-scale, aerial spraying approach adopted in Green Bay was much more effective at controlling Phragmites than the property-scale management patchwork of actions in Saginaw Bay.? By applying a landscape-scale treatment, propagule pressure is also being reduced and this may be a factor in the success.? However, timing and application of treatment in Saginaw Bay were variable and most sites lacked follow-up treatment or mowing/burning which are also factors in the success. 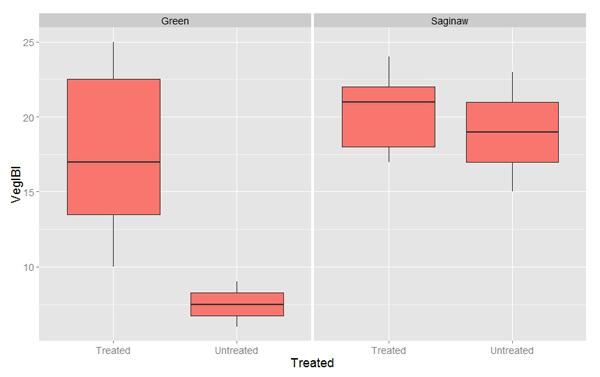 Vegetation IBIs in treated and untreated coastal wetlands of Green and Saginaw Bays during the post-treatment period.

The responses of wildlife species to Phragmites invasion and control are individualistic and complex. For some species, dense Phragmites growth provides no habitat value, but for others, including some declining species, Phragmites serves as a food source, shelter, nest material, and/or buffer vegetation.? The anuran and bird data collected in Green Bay and Saginaw Bay between 2011 and 2015 revealed no strong impact of Phragmites invasion on anuran communities.? It should be pointed out that overall year-to-year variations in surveys were sometimes large even in the absence of treatment.? Multiple recent studies have identified a link between Phragmites cover and the probability of habitat desiccation (Mazerolle et al., 2014; Perez et al., 2013). However, Mazerolle et al. concluded that Phragmites invasion did not appear to be an important driver of population dynamics compared to the influence of the landscape matrix surrounding breeding wetlands.

While point count surveys provide information about the assemblage of wildlife species breeding at a site, they do not characterize breeding success. In addition, dynamics in recruitment from a wider region could mask local effects on breeding success.? In this context, point count surveys might best serve as a preliminary monitoring tool to screen for the presence of rare or special-concern species. If found, a protocol that monitors the demographic parameters of those species (i.e., nesting productivity, post-fledging productivity, recruitment, or survivorship) can then be put into place. One important impact that our study did reveal is that marsh nesting obligate species were negatively affected by mowing of Phragmites in the short- to medium-term because they rely on that cover for nesting.? Thus, it would be a good management practice to mow in patches over time to reduce the effects on marsh nesting obligates when present.

Aerial and satellite imagery were used to map the extent of the Phragmites invasion, including areas of standing dead and fallen stems, as well as the leading edges and other vegetation cover. Three different maps with varying resolutions and data sources were created to help determine and compare the different uses in managing invasive Phragmites. The highest resolution images (15 cm) offer the most detail of Phragmites condition (live, dead standing, fallen detritus) and pick up even the smallest patches, regional mapping? for broader scale management may provide sufficient resolution and there is a trade-off between cost and resolution. 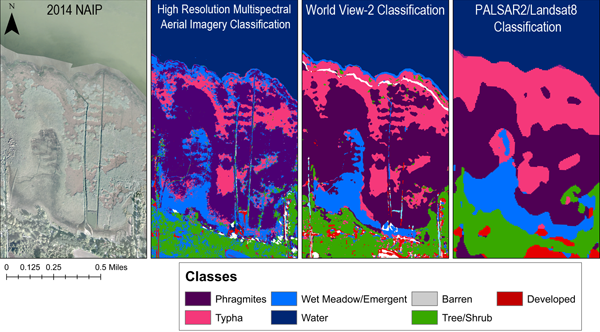 Maps of post-treatment live Phragmites at site 518C, MDNR demonstration site treated in 2007-9. The Aerial image classification was collected at 15 cm resolution, WorldView-2 at 1.85 m resolution and the Landsat8/PALSAR-2 at 30 m resolution. 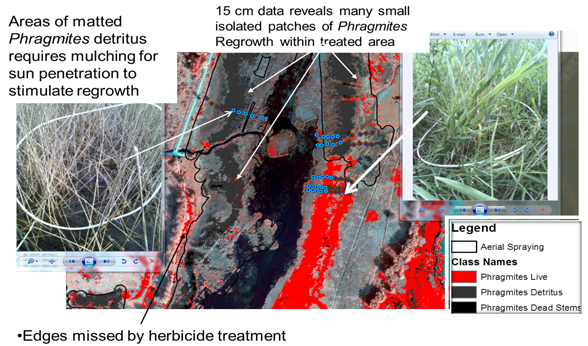 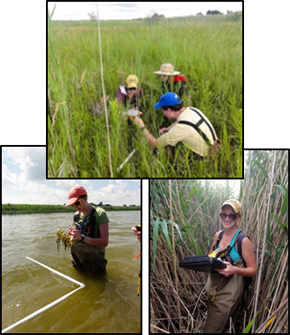 If you missed it, the recording of the Remote Sensing Webinars are now available!

You can request the following datasets: 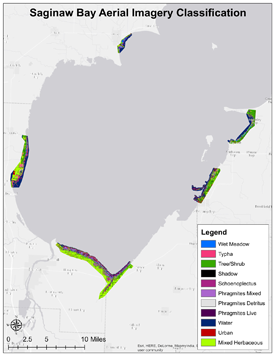 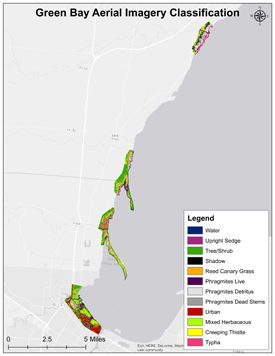 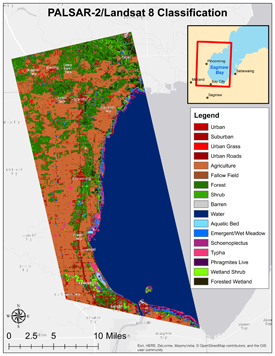 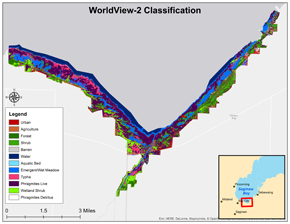